Dahua’s DSS (Digital Surveillance System) is an all-in-one Central Management System (CMS) / Video Management System (VMS) that encompasses a wide range of features and functions within video surveillance. It manages IP cameras and recorders and is able to connect to third-party cameras via the standard ONVIF protocol. Here, we will discuss the differences between the different Digital Surveillance Systems and help you decide which one is best for your application. 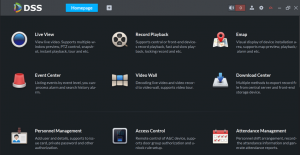 Why You Need a DSS

If you’re an IT manager or system integrator, a DSS is a valuable central portal to manage all your video surveillance channels and devices. This includes NVRs, DVRs, IP cameras, thermal cameras, facial recognition cameras, PTZs, access control devices, intercoms, and video wall devices. Unlike other brands, there is no license fee to use the Dahua DSS.
To set up the DSS and to add devices to the system, you will need to follow basic networking protocols (or refer to the Dahua Wiki) to do things like add IP addresses, set up user permissions, and port-forward. Once the devices have been added, the interface is very user-friendly to navigate. Just a few clicks will give you live views and recorded playback. A thumbnail search function lets you quickly identify and search for video clips. 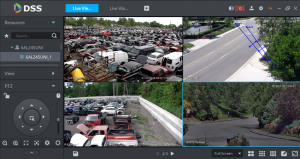 Which DSS to Choose

DSS Express is a free, software-only DSS that supports up to 256 channels. Because it allows only one client to manage the devices, it’s best for residential and SMB applications. Another option for DSS Express is the DHI-DSS4004-S2 hardware system that supports up to 512 channels.
DSS Pro is the solution for managing multiple locations, like retail chains and law enforcement or transportation environments. It is a hardware system preloaded with Linux-based software. It manages up to 2000 channels and 512 devices per server, scalable so you can add multiple systems as your needs expand. Multiple users can use DSS Pro and multiple levels of permissions can be applied.

The Benefits of Linux-Based DSS Pro

Linux-based DSS Pro (DHI-DSS7016DR-S2)  has room for expandable video storage, with fifteen hot, pluggable hard drives via iSCSI with support up to 200TB. If that’s not enough storage, you can add an additional Dahua Enterprise Video Storage (EVS) device to the DSS system.
Linux-based DSS Pro supports a greater number of facial recognition cameras than DSS Express, and  supports License Plate Capture (LPC) cameras as well. Additional differences between them are outlined on our comparison chart, here. 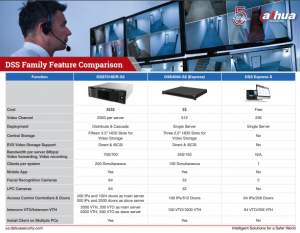 To learn more about our DSS products, click here.